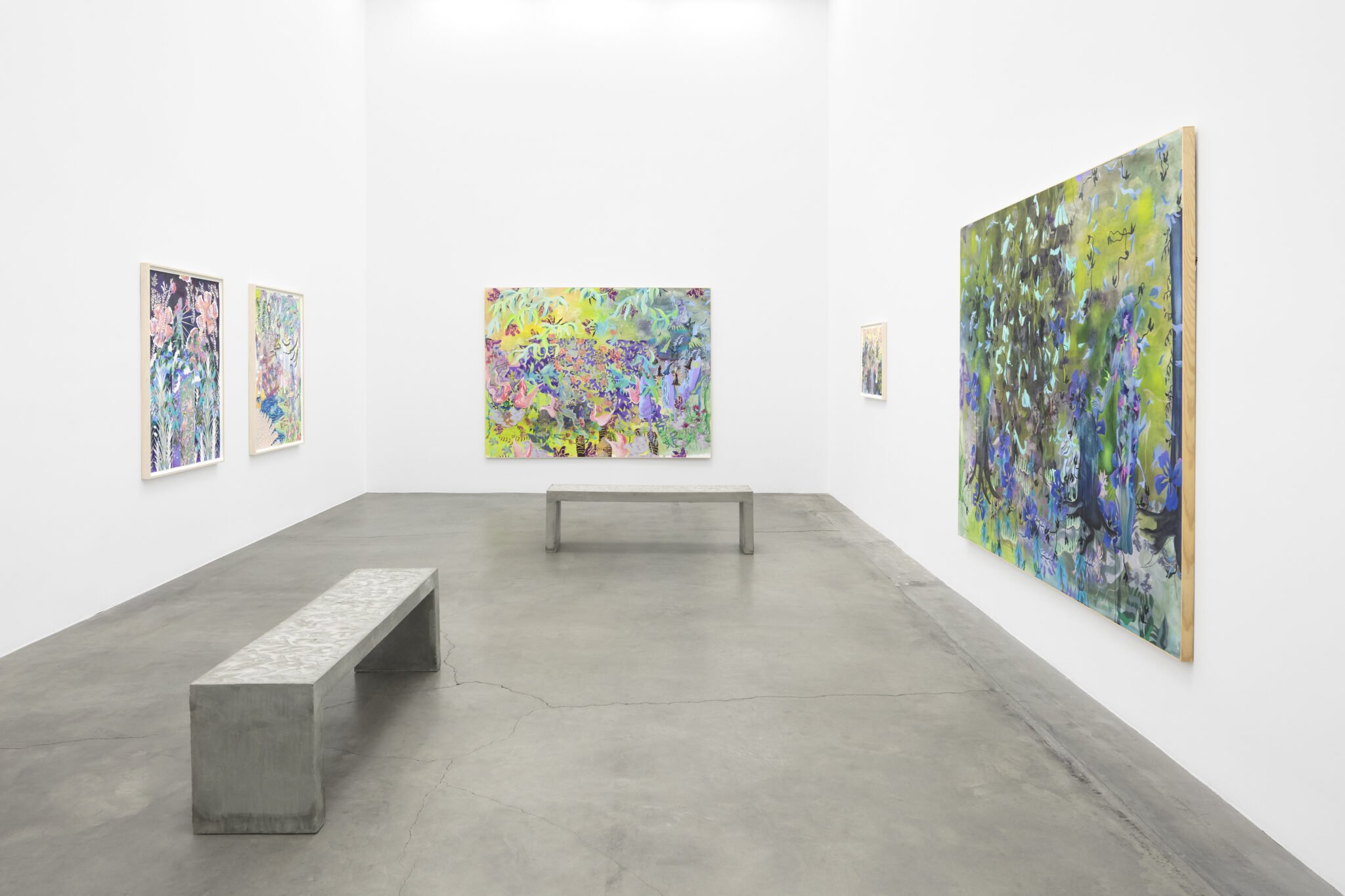 Presenting an overgrown landscape both verdant and putrefied, Strong Blossoming Thing Forever comprises large-scale paintings on panel and works on paper, both deliriously vibrant and feral. With a title at once promising and threatening, the exhibition emerges from a year of biological, political, personal and collective turmoil. Rather than replicating the surface details of our environment, Weber’s marvelous evocations of nature concern themselves with the spiritual essence of the world, decentralizing the figure, while treating landscape as something of a fairy tale character in itself.

Three large panels depicting an Edenesque world dissolving into maelstrom anchor the exhibition. A dreamful ease establishes a romantic vision of the world; the figures are harmonious with their surroundings. Conflict emerges in Return no more as vines twist around limbs and dense flora suggests looming violence of nature. Breaking from a traditional fairy tale structure, Weber withholds the clear ‘happily ever after’ in Long leaved flowers weep. The central column is dark and brooding with winged tentacles that coil about the composition as an evil haze descends. The figure appears from the tumult, standing, yet ragged and weathered. Together these works uncover the dualities of nature—as a source of beauty and innocence, equally entwined with aggression, and indifference.

With the works on paper Weber leaves a small subtle outline of white negative space around the tangled forms. Keeping each shape discreet and slightly removed from its surroundings, she crystallizes nature, organizes, tames, and domesticates what is unruly and wild. This formal choice creates a feeling that everything is coming up to the surface while also allowing viewers to pause and digest her vivid colors, elaborate patterns, and barbed details.

In this exhibition Weber continues to confound traditional expectations of the landscape genre. By choreographing vegetation through her imaginative stylizations, the artist proposes that psychological and emotional worlds are as complex and as ripe for exploration as the one beyond our bodies. These perspectives converge into that of a primordial Earth Mother: loving and seductive, vengeful and jealous, and entirely fed up with having to serve humankind as a strong, blossoming thing forever.

Sarah Ann Weber (b. 1988, Chicago, IL) received her BFA from the School of the Art Institute, Chicago and her MFA from the Pennsylvania Academy of the Fine Arts. Weber has exhibited her work in solo exhibitions at venues including Anat Ebgi, Los Angeles; Club Pro, Los Angeles; and The Franklin, Chicago. Selected group exhibitions include Minnesota Street Project, San Francisco; MAUVE Gallery, Vienna, Austria; Greenpoint Terminal Gallery, Brooklyn; Hunter Shaw Fine Art, Los Angeles; Galerie Nord/Kunstverein Tiergarten, Berlin; Locust Projects, Miami; and Andrew Rafacz Gallery, Chicago. As an Artist in Residence in 2012 at the Vermont Studio Center she received an Artist Grant and was a recipient of the Ox-Bow Scholarship funded by the Joan Mitchell Foundation in 2013. She lives and works in Los Angeles.