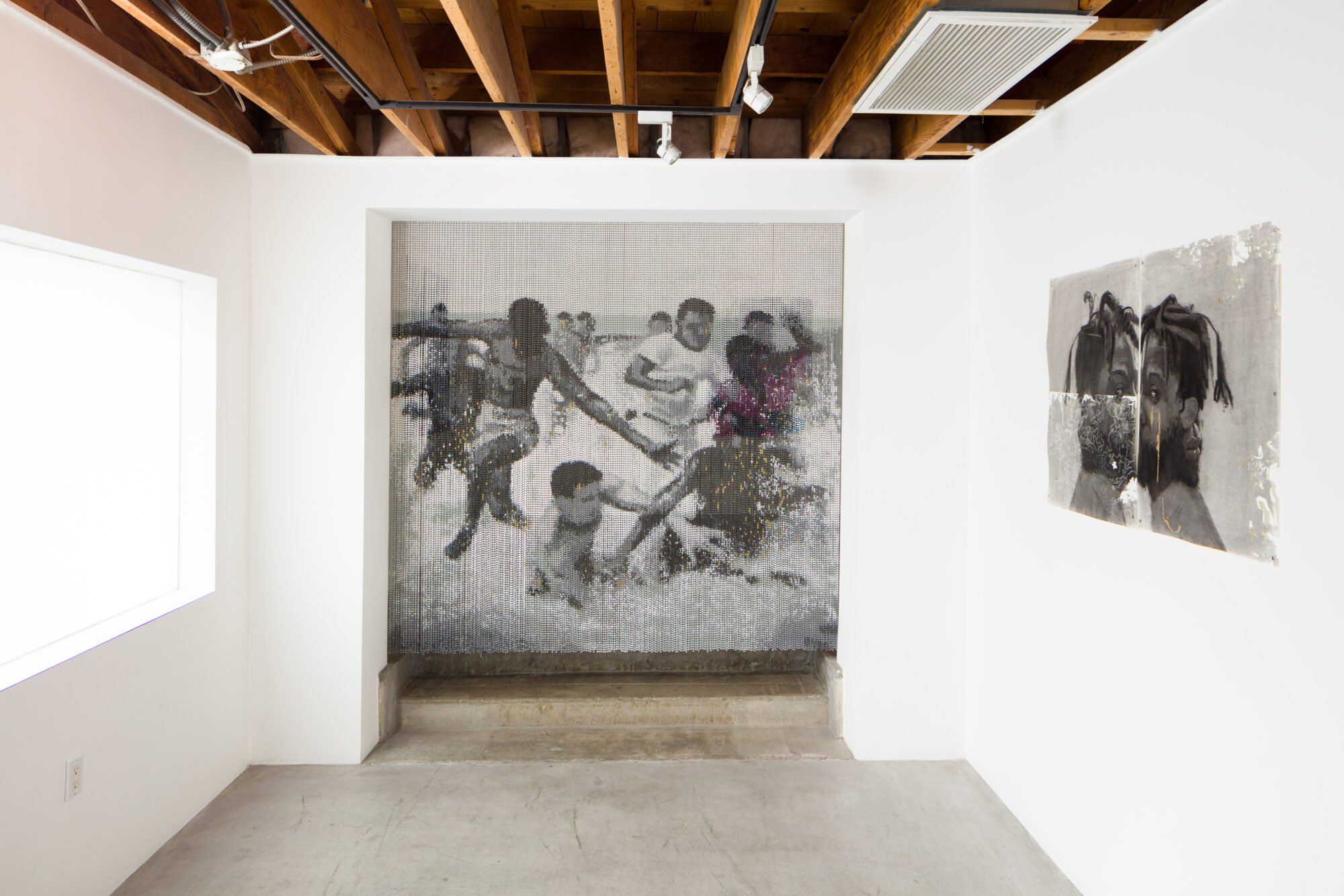 Cosmo Whyte When They Aren't Looking We Gather By The River, 2020
Installation view

Anat Ebgi is pleased to announce When They Aren’t Looking We Gather By The River, an exhibition of new work by Jamaican-born artist Cosmo Whyte on view at 2660 S La Cienega Blvd, opening November 7, 2020 and running through January 9, 2021. This is the artist’s first solo exhibition with the gallery.

To enter the exhibition viewers will pass through a hand-painted beaded curtain referencing a June 1964 archival photograph of Black Civil Rights activists attempting to swim in the Atlantic Ocean on a segregated beach marked “White” beach. Titled Wading in the Wake, the work depicts an altercation between demonstrators and a group of aggressive segregationists. Moving through the beaded partition, viewers activate this static historical image, a gesture of pixelation and deconstruction, implicating the audience as more than mere spectators—a strategy that underscores Whyte’s artistic practice.

For this exhibition, Whyte also completed several large scale charcoal and gouache drawings on paper. Made throughout this tumultuous year, he has woven these works with connections between Caribbean Carnival and the Black Lives Matter protests taking place across the country. Braiding together imagery from these distinct gatherings, they reveal a common goal of holding space for community and self determination in the face of present and historical Black oppression. Combining multiple sources, Whyte creates atemporal layers of the personal and archival from which arise new narratives and mythologies.

You Are In The Black Car Burning Beneath The Highway depicts an overturned, burning police car, and is based on a photograph from the 1981 Brixton Riots, which erupted in the South London African-Caribbean community during a period of serious social and economic problems including high unemployment, poor housing, and mistrust between police and the Black community. Using a forensic visual language, Whyte annotated the drawing around its edges, reconstructing the image with emotional and impressionistic commentary rather than didactic text. The title for the work comes from the first line of the poem “For Black Children at the End of the World—and the Beginning” by Roger Reeves published this past June.

From his drawings to his installation works, Whyte’s use of material, his conceptual conceits, and his allegorical engagement with historical events and images, frequently draw upon his Caribbean roots, while also investigating the broad complexities of Black diasporic and migrant experiences. Resulting in work that feels simultaneously familiar and dislocating and reflects the multiplicity and fluidity of identity.

Cosmo Whyte (b. 1982, St. Andrew, Jamaica) received a BFA from Bennington College, a post-baccalaureate at Maryland Institute College of Art, and a MFA from University of Michigan. Whyte has exhibited his work widely including the 13th Havana Biennial, Cuba (2019), as well as the Atlanta Biennial (2016) and the Jamaica Biennial (2017). His work is currently on view in a group exhibition, This is America, at Kunsthal, KAdE, Netherlands. In Fall 2020 Whyte had a solo exhibition and artist residency at LUX Art Institute, Encinitas, CA and in 2019 he had a solo exhibition at MOCA Georgia, Atlanta, GA. Whyte has also participated in exhibitions at The High Museum of Art, Atlanta, GA (2019); The Drawing Center, New York, NY (2019); The Somerset House, London, UK (2019); Museum of Latin American Art, Los Angeles, CA (2017); Atlanta Contemporary, Atlanta, GA (2016); Centre Georges Pompidou, Paris, France (2016); and the National Gallery of Jamaica, Kingston, Jamaica (2014). His work is in the permanent collection of the High Museum, Atlanta, GA. Whyte has been the recipient of the Art Matters Award (2019), The Louis Comfort Tiffany Foundation Award (2019), the Working Artist Award (2018), The Drawing Center’s Open Sessions Fellowship (2018), Artadia Award (2016), among others. In 2021, Whyte will participate in Prospect 5, New Orleans. Whyte lives and works between Tallahassee, Florida, and Montego Bay, Jamaica.