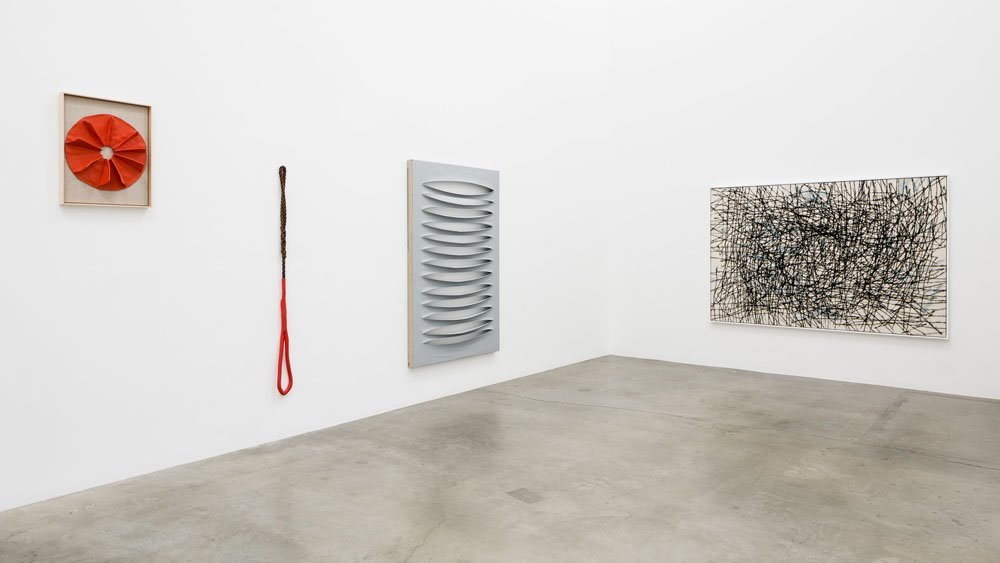 Restraining herself to a palette of raw canvas, thread and acrylic paint, Thomas’ work explores the play between common studio materials and abstraction within each of her compositions. Jagged extrusions, folded thresholds and frenetically woven strands of thread transform her canvases into paintings that are, at once, physical, architectural and sculptural. While each piece defies the flatness of the canvas, her work still speaks to the language and legacy of painting and drawing. Her approach on the canvas and sculptural aesthetic recall the works of many modernist female artists. From the tangled, slumped and webbed rope works of Eva Hesse, to the uncanny assemblages of Louise Bourgeois, Thomas’ work gestures toward an art historical moment in which female painters and sculptors were turning towards abstraction through the repetition, weaving and layering of materials. She extends this dialogue into her artistic creation, expressing a conception of the tactile interaction between the body and the canvas.

In this vein, Thomas’ material interventions interrogate the canvas from within itself. Whether angularly folded or bunched up in ribbon-like fashion, her canvases cease to function as raw mediums and are transformed into intricate material compositions, such as those within herLANDSCAPIFICATION series. These works invert notions of both surface and paint as material, as she uses layers of gesso and acrylic not to color, but rather structurally harden canvas, burlap and linen. Similarly, her Complex Systems series uses thread in gestural, Pollock-like streaks as a method to apply color without paint, as if creating a woven surface to be painted upon. In pushing the limits of this medium, she illustrates her understanding of painting’s malleability.

Across her surfaces of repeatedly folded fabrics, labyrinthine woven thread and sculpturally pleated canvas, Thomas dismantles traditional notions of painting while firmly rooting her work in its historical context. As she unravels and liberates mediums from their proscribed roles, she constantly broadens her unique grasp of material and its extension as a form capable of conveying complex associations relating to language, communication and the body’s relationship within space.

Samantha Thomas lives and works in Los Angeles, CA. She holds a BFA from the Art Center College of Design, Pasadena, and has had solo exhibitions at LAXART, Los Angeles, Mike Weiss Gallery, New York, and RH Contemporary, New York, among others. She has participated in group shows at Marine Projects, Venice, CA, Fredric Snitzer Gallery, Miami, Museum of Contemporary Art, Los Angeles, and Pacific Design Center, Los Angeles. Her work has been shown internationally as part of ARCOmadrid, Spain and Dominique Fiat, Paris.