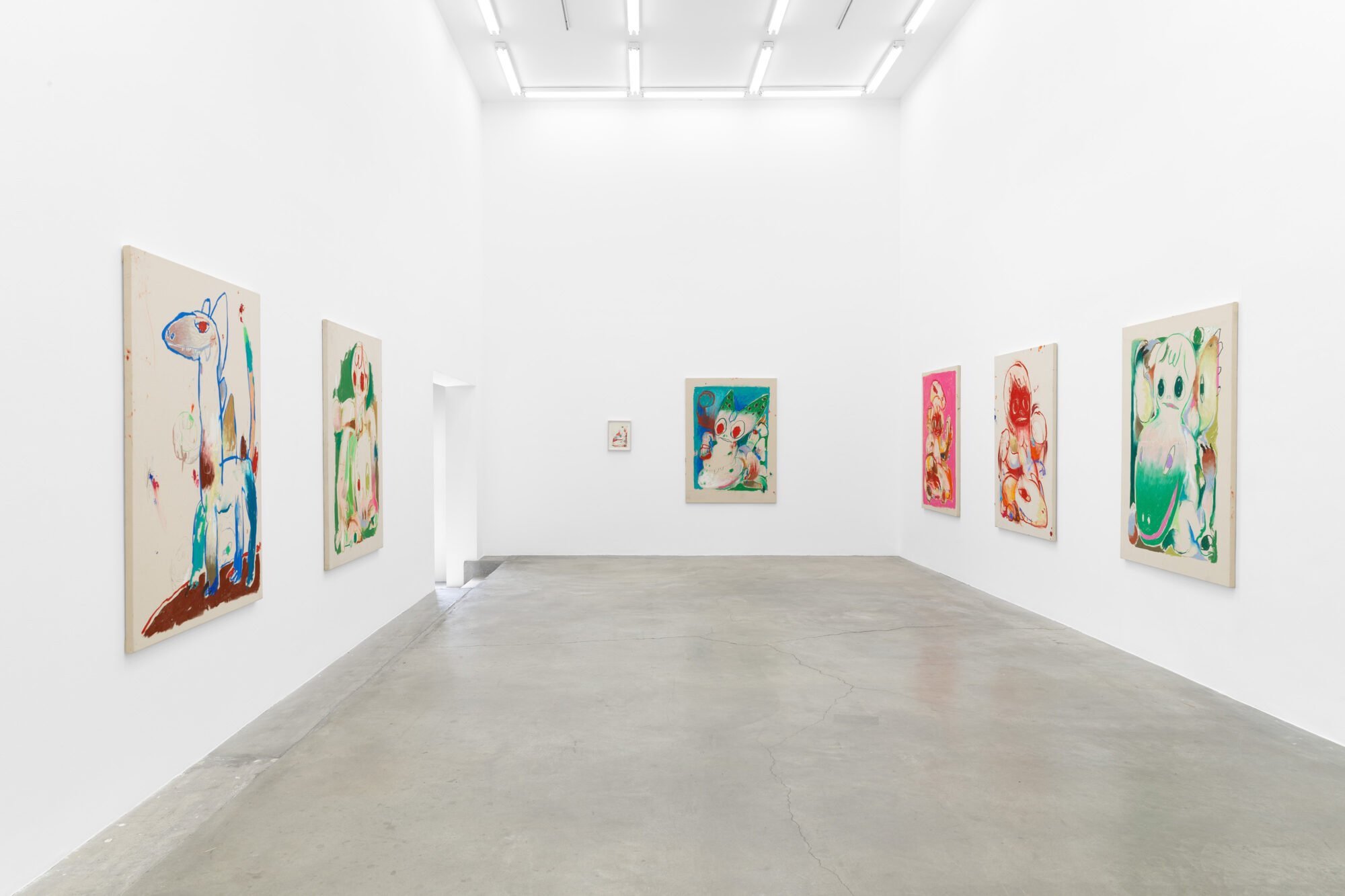 Anat Ebgi is pleased to announce Samantha, a solo exhibition by Roby Dwi Antono on view at 2660 S La Cienega Blvd, October 29 – December 10, 2022. This is the artist’s first solo exhibition with the gallery. An opening reception will take place Saturday, October 29 from 5 – 7pm.

Samantha consists of ten new paintings shown alongside a selection of works on paper. Returning to a state of childlike honesty and spontaneity are both core thematics of the works in Samantha. The title of the exhibition is taken from Spike Jonze’s science fiction romantic drama HER (2013). In this film, the sensitive protagonist Theodore falls in love with his charming, artificially intelligent virtual assistant “Samantha,” who reveals that she gave herself the name because she simply liked “the sound of it.” Antono’s way of working is similarly immediate, painting directly on the unprimed surfaces—his works are like cave paintings, simple expressions of desire as incantation. The repeated glyph-like subjects raise questions about heroism, pop culture, and nostalgia.

A self-taught painter, Antono’s works for this exhibition are rendered with loose, expressive linework, primarily in oil pastel, pigment sticks, and pencil. Antono depicts wide-eyed children and dinosaur-like animals with a scrawled and cartoonish freedom. He captures a flatness and naiveté associated with children’s drawing and his subjects echo raw or primal emotional states such as joy, rage, and sadness. The artist thoughtfully contends with ideas of representation in these works as many of the compositions seem to dissolve into pure line and color—painterly gestures of innocence and playfulness.

His boldly colored characters, outlined and embellished with premixed reds, greens, and blues push to the foreground of the picture plane. These latest works in Samantha make use of blank, raw canvas and the silent world of these characters continues, in pauses and margins. These breaks shape the field—emphasizing rhythm, space, and the delicate cadence of the artist’s hand, highlighting sensual, spontaneous, and emotional manifestations of our humanity. Out of the linear flow of time and logical thinking, Antono’s characters occupy places of humor and harmony, drawing out each other’s light.

Roby Dwi Antono (b. 1990 Semarang, Indonesia) has been featured both in Indonesia and internationally in numerous solo and group exhibitions including presenting work at the 2017 Yogyakarta Biennale; Nanzuka Underground, Tokyo, Japan; and Gallery Droste, Paris, France. Antono lives and works in Yogyakarta, Indonesia.