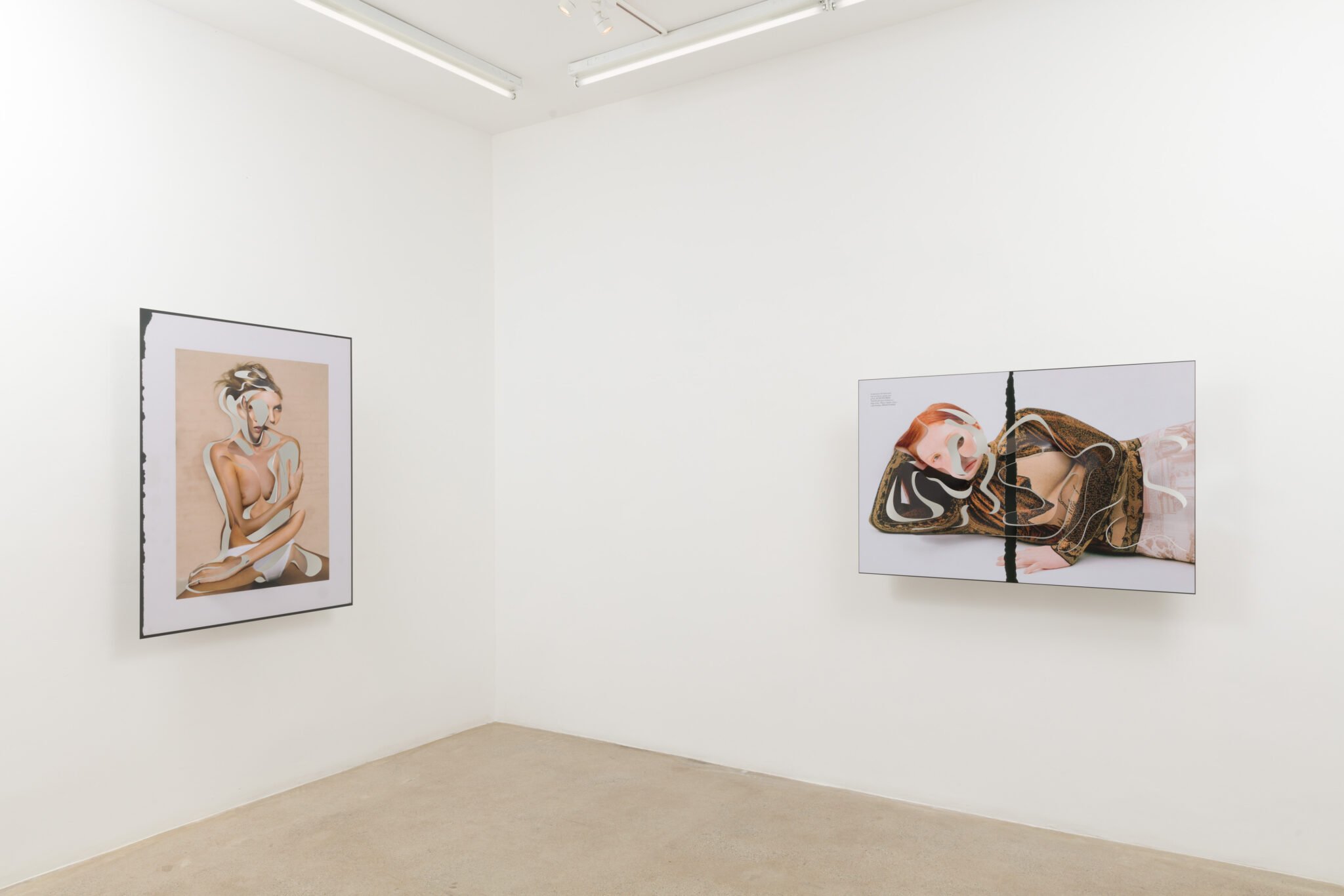 “Some images ask to be folded or covered, others suggest a line. They have their language. And I try to understand how they speak to me.” – Amie Dicke.

The exhibition’s title refers to a striking new technique whereby Dicke uses a continuous, meandering incision to slice into aluminum plates bearing composed fashion portraiture. As she follows her line around the immaculate bodies in works such as ONE-LINER III (Holding the Rodeo Image) and ONE-LINER IV (Listen), the artist maps the touch of her hand and eye around the images, then bends new shapes into the metal. “Nothing is really removed, nothing is lost, just opened,” she notes. By adding space where there was none, and creating work that elides the conventions of two- and three-dimensional forms, Dicke continuously distorts and realigns the possibilities of our visual experience. “They are almost a movie in one still,” she says of these intriguing assemblages.

Many of the works on show in this exhibition feature the edges of a book or page in some way, so context and framing are highly visible throughout. In her HANDLE series, which includes the work HANDLE HER (Between Sheets and Covers) seen above, the artist’s hand is literally in the frame, holding an image or partially obscuring it. “To touch is an act of curiosity,” says Dicke.

Elsewhere, a triptych of ostensibly disparate yet subtly interrelated images from Dicke’s studio archive forms a horizontal assemblage in SMILE/LEAN IN/ELBOW whereas, for works such as WITH CLOSED KNEES AND ELBOWS, Dicke’s intricate abrasions of the printed aluminum plate reveal the very metal which is the carrier of the image. Despite her mastery of inventive techniques and myriad sources, Dicke says that over and over she’s pleasantly perplexed to spot the resonances that recur in her oeuvre. “Often I think I have a new way of working, but after looking longer at it I see familiar topics, shapes and lines coming through. It’s like an autograph.”

The discriminating gaze of Amie Dicke (b. 1978, Rotterdam) reveals associations and resonances that might otherwise go undetected. Whether she’s cutting and altering fashion magazines, blowing up obscure portions from forgotten studio portraits or painstakingly covering books with layers of powdered make-up, Dicke’s practice is characterized by judicious selection and removal.

Dicke rose to prominence in the early 2000s after a period of living and working in New York City that saw her literally de-facing the advertising imagery of Madison Avenue, obscuring the features of famous models and driving nails through glossy publications – some of which subsequently commissioned Dicke to contribute to their pages.

Amie Dicke lives and works in Amsterdam. Her work has appeared in institutions including Tate Modern in London, Project Space 176 in London and Schirn Kunsthalle in Frankfurt.