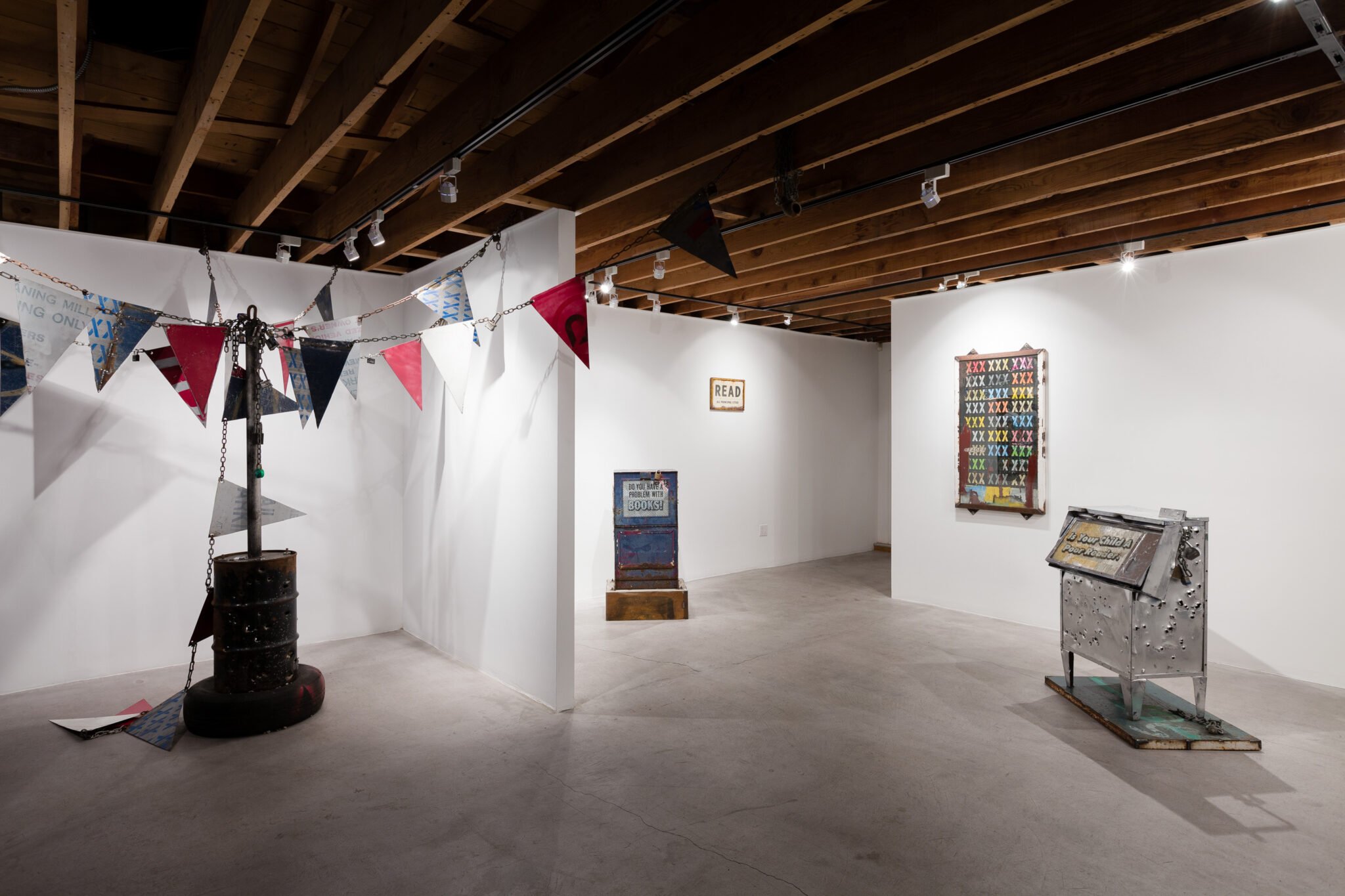 Anat Ebgi is pleased to present Mixed Dealings by The Reader. The exhibition will open on August 3rd, and will be on view until August 31st. A reception for the artist will be held on Saturday August 3rd from 3pm, at the gallery located at 2660 S. La Cienega Blvd, in Los Angeles.

Traveling repeatedly throughout the US, The Reader has quiet literally made a name for himself that is there for all to see. Leaving a mass of public adornments for over a decade, Reader has maintained an illusiveness and anonymous presence in a desolate grey zone between so called “street art” and graffiti. In recent years Reader carried his oft-cryptic messages of literacy and inquiry into the gallery at the encouragement of his longtime friend Elias Hansen (Lawrimore Project, Seattle 2011).

A scavenger and “relocator” of the discarded and overlooked, Reader transforms untraceable detritus into the foundations of mixed media screen prints and sculptures. His workspace resembles a “byproduct chop-shop” more than it does a traditional artist’s studio.

Characteristic of his work is the striking and recurrent use of text. Reader revives now nearly obsolete newspaper boxes and presents them in a context suggestive of ulterior purposes. The boxes themselves, isolated from their natural environment, appear to be salvaged by any available means. Scorched and mutilated they are newly employed by a rival enterprise. Metal sheets accented with both vibrant and weathered hues are welded together in a patchwork reminiscent of color field painting.

Both unavoidable and hidden amongst the layers, Reader’s works are dealt through a range of materials. Some give clues to process and approach, others leave open a wide scope of interpretation, and all represent real work. That is the kind that is done outdoors and leaves one dirty. As the show title alludes to, Mixed Dealings is the result of a multifaceted discipline and uncertain means. Reader may not be hacking at establishment, as much as he is attempting to forge one anew.

Mixed Dealings is Reader’s second exhibition with the gallery. In 2012, he collaborated with Elias Hansen on the two-person exhibition, We barely made it. Previous exhibitions include Lawrimore Projects, Seattle; Ditch Projects, Portland; White Box at the University of Oregon, Portland; and A Palazzo Gallery in Brescia, Italy. His work has been reviewed in Juxtapose Magazine, The Oregonian, and the Los Angeles Times.