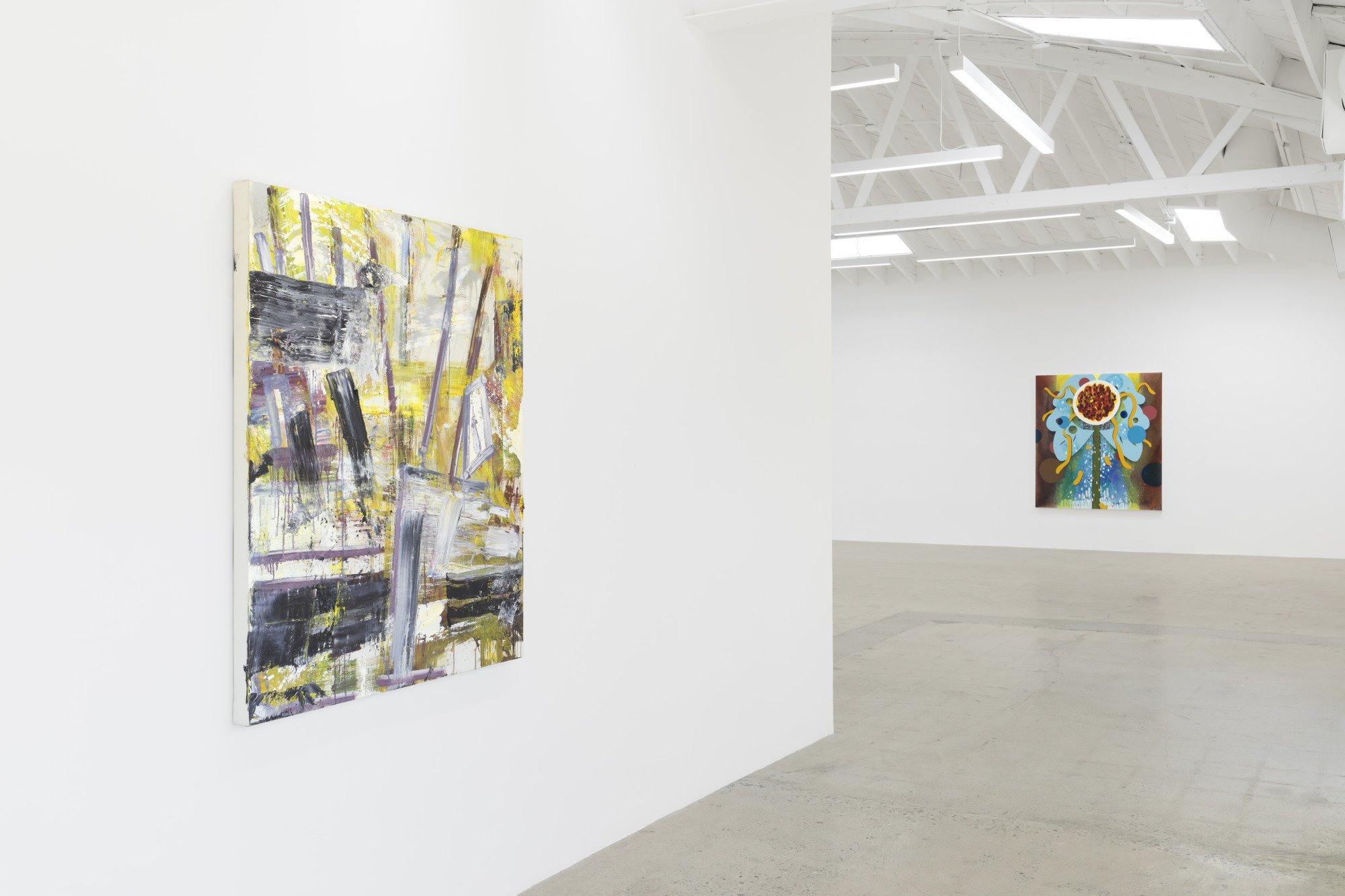 Anat Ebgi is pleased to announce Kick Ass Painting: New York Women, an exhibition that brings together three heavyweights: Louise Fishman, Brenda Goodman, and Carrie Moyer. Co-organized with Patricia Hamilton, the exhibition will run from June 5 to July 10 at our 6150 Wilshire Blvd location.

The exhibition offers a visual feast of aesthetic exploration and emotional dynamics from artists several decades into their respective careers. Carrie Moyer drenches her paintings in sanguine color. Her work represents maximalism, anchored by evocative bodily forms, transparent veils of aqueous pigment, and flat surfaces. Brenda Goodman, working on panel, incises, etches, and scrapes with chthonic fierceness. Her multilayered paintings throb and crack with a primal palette, provoking thoughts of the irreparably damaged and disfigured body. Louise Fishman’s ominous and cryptic paintings conjure ambiguous cross currents of feeling: somber and genial. Gash-like brush strokes are organized around the principle of the grid, unfolding fugues of movement and displacement.

The rapturous combination of anthropomorphic forms (biological) and geometric shapes (conceptual) contort and coalesce in unexpected ways, revealing internal logic that points to the idiosyncrasies and dualities of the human soul. Aside from their obvious shared affinity for experimental, over-the-top, and sometimes high-camp tableau, the exhibition also pays tribute to these artists and their political spirit of feminism.

Louise Fishman (b. 1939, Philadelphia, PA) began studying art in 1956 at the Philadelphia Museum School of Art, then at Stella Elkins Tyler School of Art, where she earned her BFA in Painting and Printmaking, and a B.S. in Art Education in 1963. She completed her MFA at the University of Illinois in Champaign/Urbana. Her work is represented in many public collections, including: the National Academy of Art and Design, NY; the Metropolitan Museum of Art, New York; the Art Institute of Chicago, Chicago, IL; the Carnegie Museum of Art, Pittsburg, PA; the High Museum of Art, Atlanta, Georgia; the Jewish Museum, New York; the Neuberger Museum of Art, Purchase, NY; the Krannert Art Museum, Champaign, IL; the Weatherspoon Art Museum, Greensboro, NC; the Hood Museum, Hanover, NH; the Kunstmuseum Lichtenstein, Vaduz, Lichtenstein; Museum of Contemporary Art, San Diego, CA; the Woodmere Art Museum, Philadelphia, PA; and the National Museum of Women in the Arts, Washington, D.C. She was the recipient of three National Endowment for the Arts grants; a New York Foundation for the Arts Fellowship; and a Guggenheim Fellowship, among others. She was included in three Whitney Biennials, 1973, 1987, and 2014. In 2016, the Neuberger Museum of Art organized the artist’s first retrospective, curated by Helaine Posner; the retrospective traveled to the Weatherspoon Art Museum, University of North Carolina at Greensboro and was accompanied by a second exhibition at the ICA Philadelphia titled Paper Louise Tiny Fishman Rock, curated by Ingrid Schaffner. A retrospective of work on paper, A Question of Emphasis: Louise Fishman Drawing will be at the Krannert Art Museum, Champaign, IL in January 2021.

Brenda Goodman (b. 1943, Detroit, MI) attended the College of Creative Studies, where she earned her BFA; the college also awarded her an honorary Doctorate of Arts in 2017. Living in the 1960s in Detroit, Goodman was a member of the famed Cass Corridor Movement. In 1976 she moved to New York City and was included in the Whitney Biennial in 1979. Since the 1970s, she’s had forty solo exhibitions. In 2015, a fifty-year retrospective of Goodman’s work was presented at the Center for Creative Studies and at Paul Kotula Projects. That same year, her work was included in the American Academy for the Arts and Letters annual invitational, where she received the Award in Art. In 2019 she was inducted into the National Academy of Design. Goodman’s work is included in the public collections of the Museum of Modern Art, New York; Carnegie Museum of Art, Pittsburgh; Museum of Contemporary Art, Chicago; the Santa Barbara Museum of Art; the Detroit Institute of Arts; and the Agnes Gund Collection. She has received fellowships from the National Endowment for the Arts and the New York Foundation for the Arts.

Carrie Moyer (b. 1960, Redford Township, MI) earned a BFA from Pratt Institute (1985), an MA in Computer Graphics from New York Institute of Technology (1990) and an MFA from Bard College (2000). Her work has been exhibited widely in both the United States and Europe. In 2017, her paintings were featured in the 2017 Whitney Biennial in New York. Her museum exhibition history includes solo exhibitions, Carrie Moyer: Pirate Jenny, that originated at the Tang Museum, Saratoga Springs, NY and traveled to SCAD Museum of Art, Savannah, GA, and the Columbus College of Art and Design, OH (2013); and Interstellar, at the Worcester Art Museum, MA (2012). Group exhibitions as well, Three Graces: Polly Apfelbaum, Tony Feher, and Carrie Moyer, at the Everson Museum of Art, Syracuse, NY; Pretty Raw: After and Around Helen Frankenthaler, at the Rose Art Museum, Brandeis University, Waltham, MA; and Agitpop!, at the Brooklyn Museum, NY, all in 2015. Moyer is a Professor in the Art and Art History Department and Director of the Graduate Program at Hunter College and Vice Chair of the Board of Governors at Skowhegan School of Painting and Sculpture in Maine.

Patricia Hamilton is an art dealer and writer based in Los Angeles. At 26 she founded Hamilton Gallery of Contemporary Art on West 57th street in New York, particularly important for its support of sculptors and mid-career artists, especially women. The gallery operated from 1977-1985. Since closing her gallery, Hamilton remained active as a dealer/consultant promoting artists, organizing exhibitions, and publishing catalogues. She is a founding member of ArtTable, a professional organization now in its 30th year dedicated to advancing leadership and fostering opportunities for women in the arts. Hamilton is currently finishing a forthcoming tell-all “The Blonde with the Balls: 40 Years in the Art World.”