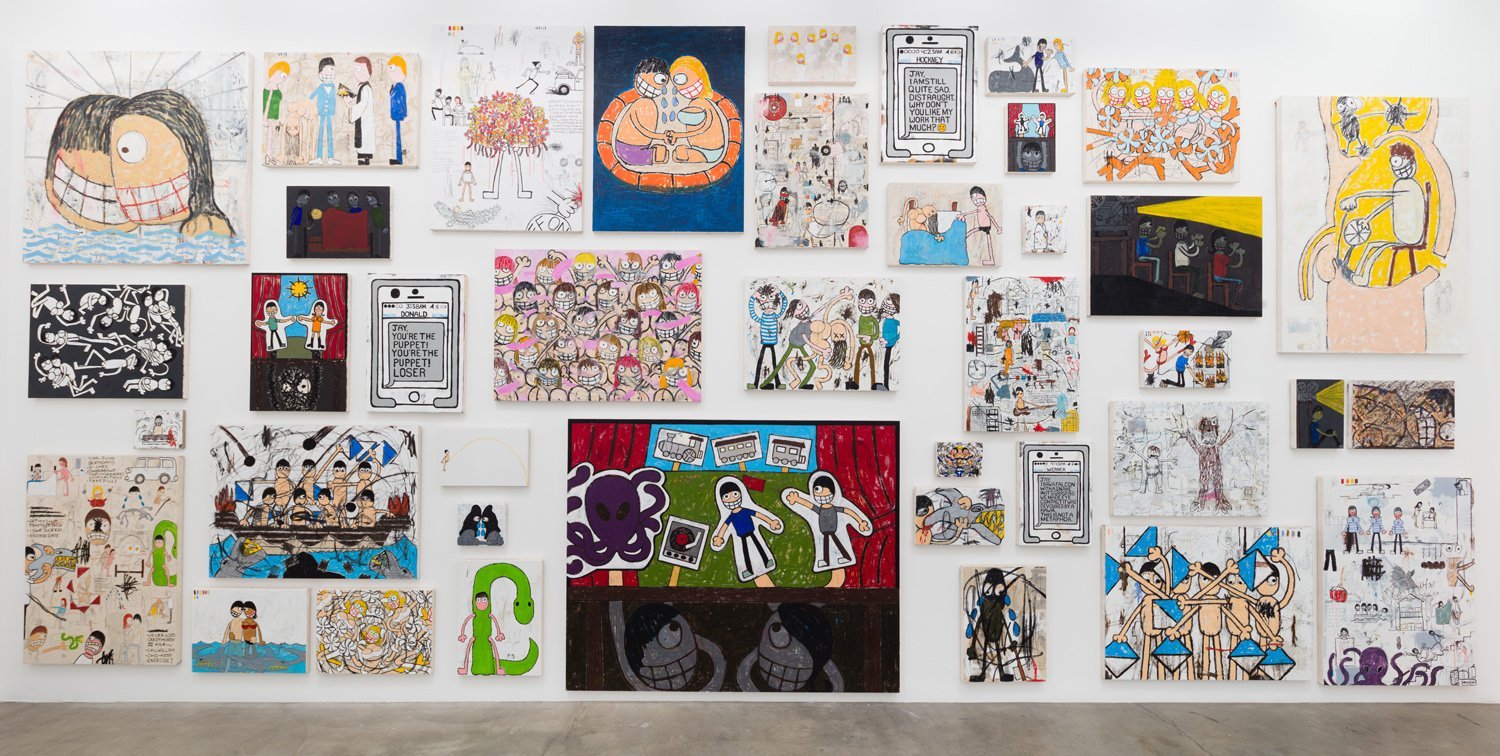 Anat Ebgi is pleased to announce Bye Jay Stuckey, by Jay Stuckey, the third solo exhibition of Jay Stuckey at the gallery. In a monumental salon-style hang using the height of the gallery walls, the paintings span several bodies of work made throughout the past five years that highlight the artists’ preoccupations with creating an entirely new pictorial language.
Stuckey’s work operates on the premise of the real and imagined. Daily routines, lovers, anxieties, personal and public histories cast a nebulous galaxy of characters and situations in an illusory, dreamlike presence. Navigating this limitless material is the representation of the dark-haired “every man” traveling between mundane tasks, house fires, battles with himself, bandits, and scantily clad cheerleaders.
Equally humorous as dark and melancholic, Stuckey taps into an expressionist desire to communicate using text messages, semaphore codes, and his unique iconographic language where the lines between art and his life become evermore porous. Each canvas becomes diaristic, where the subject is often a stand-in for the artist himself. Notations, names, reminders and aspirations are scattered about his compositions, punctuating the atmosphere of the paintings and binding them to the real. Through working in this first-person tense, Stuckey’s archetypal images touch something universal — feelings that transcend both artist and viewer to reach the innately human.
Jay Stuckey (b. 1968, Washington, D.C.) lives and works in Los Angeles. Stuckey received his MFA from the School of the Art Institute Chicago, and BFA from Brown University. He has exhibited internationally at venues including Abel Raum für Neue Kunst, Berlin, Institut Franco-American, Rennes, Eric Firestone Gallery, New York, Northwest Vista College, San Antonio, Deutscher Kunstlerbund, Berlin, Blank Projects, Cape Town, Goethe Institute, Johannesburg, Green Papaya Art Projects, Manila. He is included in the public collections of the Museum of Contemporary Art, Los Angeles, CA and Collection Majudia, Montreal. He has lectured at Brown University, OTIS, and the Jung Institute. Upcoming exhibitions include a drawing show at Shotgun at The Cedars, Texas.