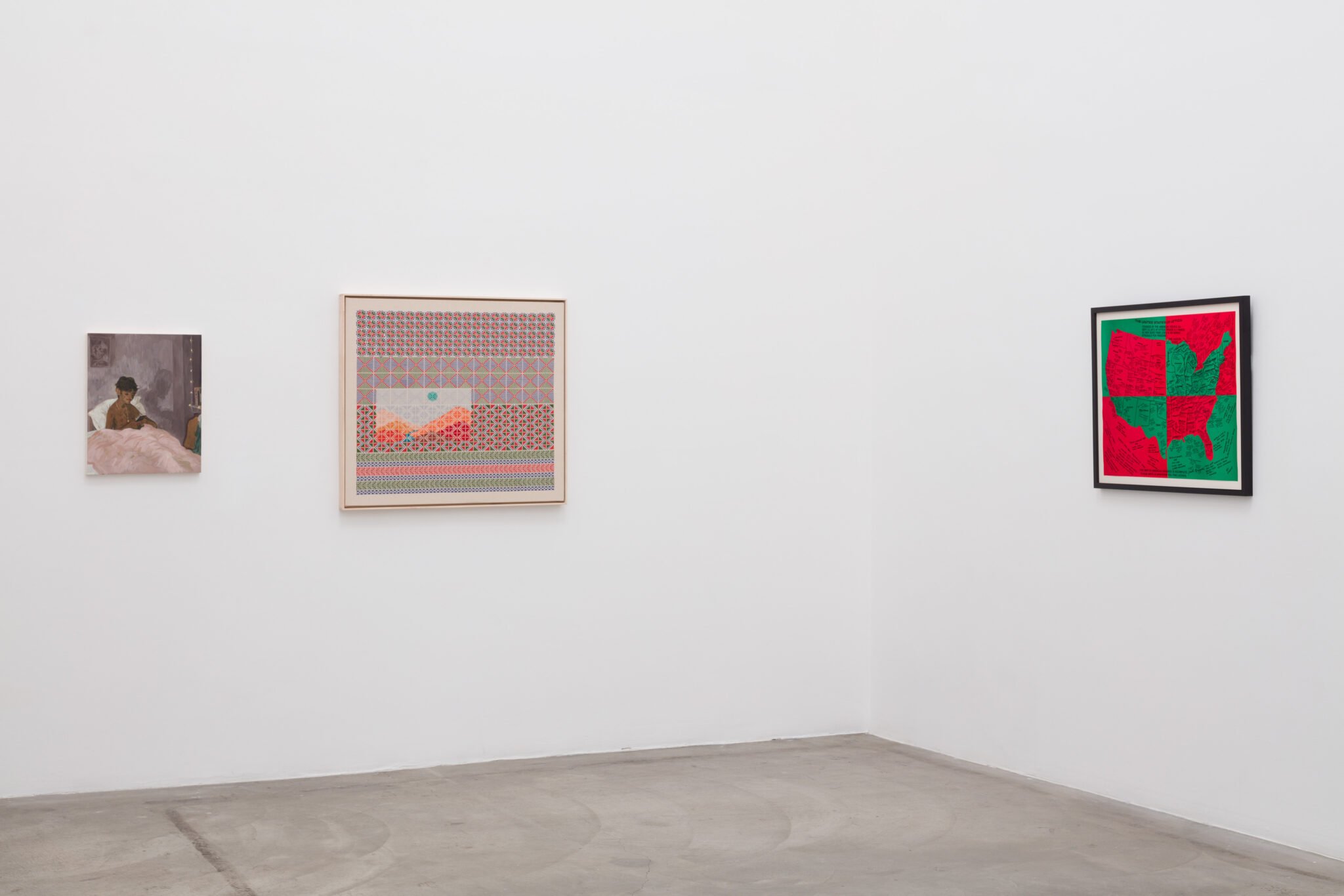 Home is Not a Place, 2019, Installation view

Anat Ebgi is pleased to announce a group exhibition featuring works by Jordan Nassar, Faith Ringgold, Salman Toor, and Cosmo Whyte. The exhibition will be on view from June 8th through July 13th. Opening reception will take place at 2660 S La Cienega Blvd on Saturday June 8th from 5-7pm.

The exhibition takes its name from James Baldwin’s 1953 novel Giovanni’s Room, the story of a young man’s placelessness as a queer American abroad. The protagonist’s conflicted sense of self and identity becomes his only source of connection to the feeling of home. He explains, “home is not a place, it is an irrevocable condition.”

Despite the inexplicable and elusive nature of one’s sense of placelessness, it is a heavy bindle slung over one’s shoulder as one presses forward. Within this context of cultural estrangement and hybridity, communities have been built. Thus the exhibition looks not to the difficulties faced by outsiders making home in America, rather these artists explore the joy and power found within the spaces that they have created.

“Go back to where you started, or as far back as you can, examine all of it, travel your road again and tell the truth about it. Sing or shout or testify or keep it to yourself: but know whence you came.” (1)

As if through a kaleidoscope, the artists work reveal the endless colors and shades of emotions within this country’s conflicted society and history. With Faith Ringgold’s series, Coming to Jones Road, the artist follows a 200 year narrative of a group of slaves headed north which ends in her modern day home on Jones Road in Englewood, New Jersey. With this series she “tried to couple the beauty of this place with the harsh realities of its racist history to create a freedom series that turns all of the ugliness of spirit, past and present into something livable.”

Salman Toor’s explorations of figuration as a young queer of Pakistani origin living in America depict his ambiguous subjects to be reveling in the presentation of their found community. The imagined scenarios and characters parade their bodies, unashamed, donning feather boas and rivers of tears. The intimacy of these moments belies the staged narratives and envelope the boys in celebration of their most private experiences. Cosmo Whyte, whose large scale drawings pose the celebratory body of Jamaican and diasporic communities, shares the desire to present jubilation. His figures, adorned with gold leaf and black glitter, defy their colonial past, tearing it from their bodies through unbridled dance.

The soft and contemplative works of Jordan Nassar look back to the landscape of his family’s homeland. Using the traditional Palestinian craft of embroidery, he portrays the idealized and fictionalized space that has come to represent home in the minds of the diaspora—one that doesn’t and never did exist. The same celestial bodies in Nassar’s skies hang heavy in Ringgold’s. We moved along as if in one body hardly knowing where we was goin, our way lit only by a chalk-white moon in a blood red sky. (2)

Each of these artists disrobe America of its myths—and unveil the complicated and tedious nature of being an American. The works included in the exhibition celebrate the dissonance of loving the home they’ve found while championing, as Baldwin notes, “…the right to criticize her perpetually.” (3) For each moment of peaceful stillness, there is the arduous fight. Living well, building and supporting a community, and sharing one’s story are all forms of protest. To exist as an other in this country is the most meaningful and profound act of resistance.

Home is Not a Place PDF