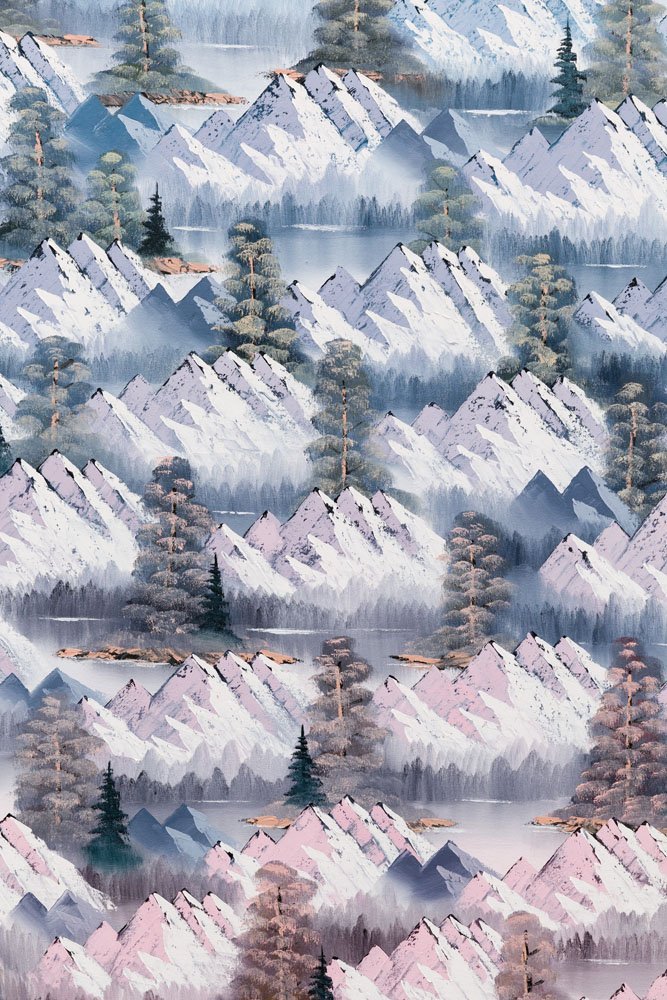 The painter observes the landscape, takes a palette knife and graces the canvas. It creates a geometric smudge of paint. Two more palette knife strokes and a mountain begins to form. It looks coarse, but with a background brush and some applied magic white, the slopes begin to distinguish themselves covered in heavy snowfall. Another mountain begins to form, just to the top right, and then another on the bottom left. The bottom of each mountain denotes a new mountain, just as each peak dissolves into a new one. One mountain, ten mountains, a canvas of mountains.

Whether you’re climbing mountains or relaxing in your estate housing, your Kappa tracksuit is affixed with the logo of two figures sitting back-to-back. Kappa’s range of football jerseys display the wearer’s affinity for clubs like West Ham, Tottenham and Leicester City. The sleeves carry the Kappa logo repeated down the sides of the tracksuits. Two figures on top, twenty down the sleeve, a line of figures down the leg. You never forget the hook ups, breakups and fuck ups you’ve experienced while wearing your Kappa tracksuit.

“I hope you are plagued with dissatisfaction your entire life,” said Bob Ross. Because that’s what makes you want to paint another forest, a hundred forests, a whole career of forests—the Sundaypainter understands the rigors of landscape painting as a leisurely pursuit. The pigments may be oil or watercolor, and are applied in gestures that create an illusion of depth, perspective and reflect the unfolding delicacy of natural light. Every landscape is different with varied nuances, yet the process remains similar. In one painting, Alizarin Crimson, Indian Yellow and Sap Green are brought onto the palette board and mixed together to create a mountain cabin within a placid, densely forested valley.

Each painting ceaselessly samples these idyllic images on repeat. One loop, ten loops, a whole tape of mixed signals. The languages are chopped and screwed, each ripple giving way to the next in an arc of color. Tie-dyed in the age of photoshopped flawlessness. The sojourn continues from each point in continued cyclical motion. The tape player’s heads are worn, the sound crackles with fuzz and it skips from overuse. The song has changed, but it is still the same rhythm.

Well, the little clock on the wall says we’re just about out of time. Happy painting and God bless.

Neil Raitt (b. 1986) recently graduated from the Royal College of Art. Raitt’s work has been exhibited at public and private institutions including the Goss-Michael Foundation, Dallas and is the recipient of the Catlin Art Prize 2014. Recent exhibitions include group shows at Untitled NYC and Choi and Lager, Cologne. Upcoming exhibitions include group shows at The Hole and Super Dakota. He lives and works in London.