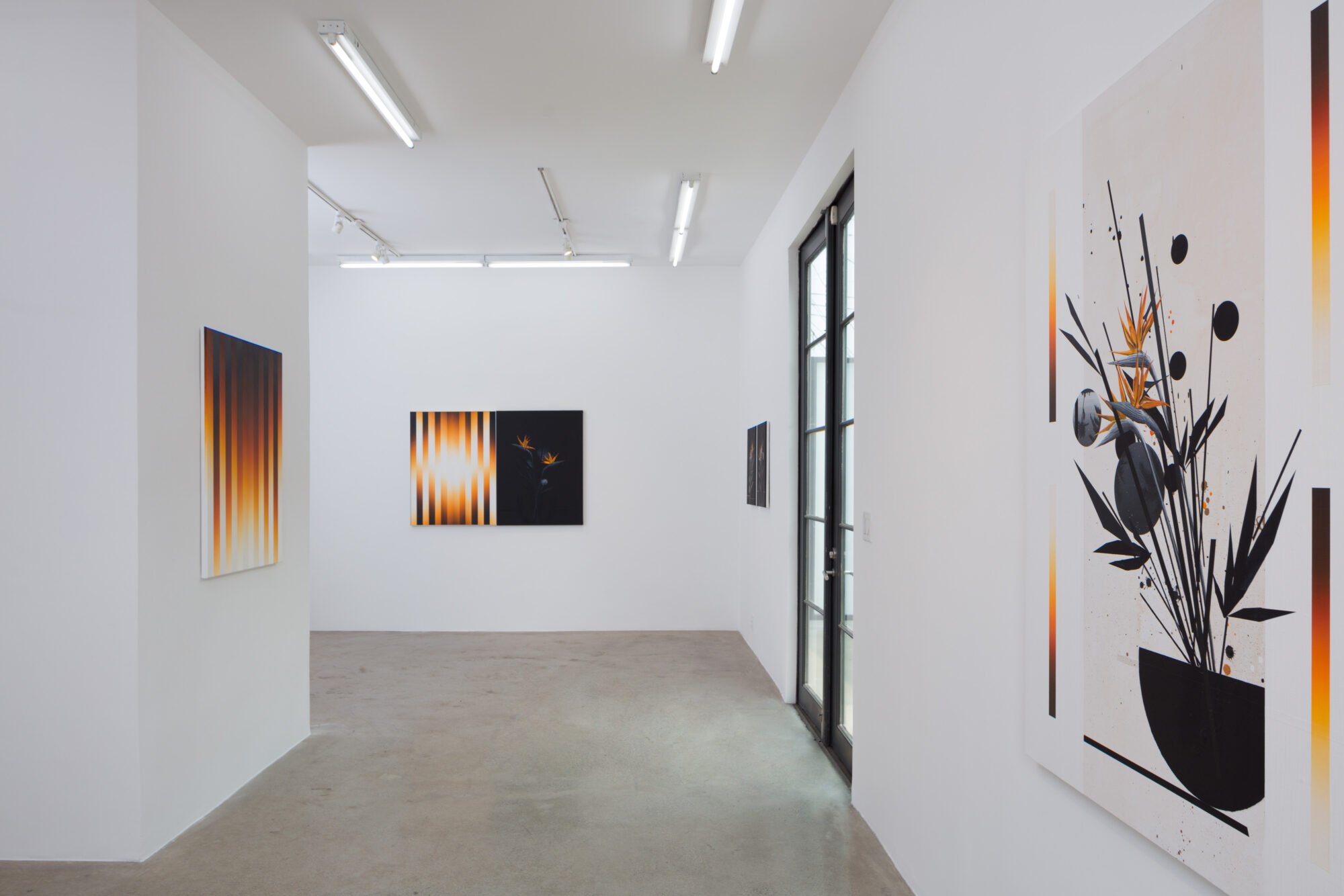 For his third exhibition with the gallery, Martin Basher has created a suite of new still life paintings depicting highly stylized arrangements of Bird of Paradise flowers and minimalist abstract botanicals. The exhibition will also include a number of Basher’s signature fade stripe paintings—alternating vertical gradations of intense sunburst oranges and yellows. Together these works represent a continuation of the artist’s interests in phenomenological affect, dimensional interplay, and environmental stress in the anthropocene.

Basher approaches the long tradition of still life painting with an eye for formal perfection and experimentation. His precise, geometrically-rendered structures are as influenced by Malevich’s suprematism and Mattise’s cut-outs, as they are by lavish 17th century Dutch still lifes. A significant point of departure for Basher however, is that set against a combination of matte and glossy blacks, the flowers themselves seem to be a light source, always drawing the eye back to the luminous iconic blooms. The tension between the organic and natural, and the artificial and constructed electrifies these paintings. Other compositions, set before more neutral backgrounds, incorporate elements such as gradient spheres alluding to sunsets, punctuating watery drips, and in one painting, a grayscale dragonfly, the first to appear in Basher’s paintings.

Evocative of lush gardens, generous weather and exotic destinations, The Bird of Paradise happens to be the official flower of Los Angeles. Like the city, the flower is also something of a chimera. Its plumage of flaming oranges conjures birds in graceful flight, yet it is a hardy plant that withstands LA’s droughts, its wildfire smoke, the trash and smog blowing off its freeways. There is an otherworldly quality to the flowers when considered closely; shockingly beautiful, visually sharp, almost cruel. And it is precisely these associations that have drawn Basher to the flowers as a motif, a botanical form of overlapping signifiers, one that is both verdant and resilient, beautiful but flinty, abundant, but almost mean. If these flowers were made of glass or steel, they would stab deep.

Basher’s painterly treatment of the flowers shows a corresponding vacillation between the beautiful and the cruel. He  limits the palette of his flowers to grays and sizzling oranges of the petals, with the surrounding stems reduced to the near-abstract. Rooted in close botanical observation, the flowers in his paintings evolve into highly stylized, Ikebana-esque depictions of the natural that suggest something hyper-natural, a vision of genetic modification, or an alter-reality, an environment evocative of an all too possible dystopian future.

Martin Basher (b. 1979, Wellington, New Zealand) holds a BA (2003) and MFA (2008) from Columbia University in New York and a DocFA (2018) from the University of Auckland in New Zealand. Basher’s work has been shown internationally at galleries and public institutions including the University of Connecticut; Art In General; Auckland Art Gallery; and Starkwhite, Auckland; Brand New Gallery; and The Public Art Fund. Basher lives and works in New York City.

This exhibition was produced with the support of Creative New Zealand.

The exhibition features a collection of still life paintings with highly stylized arrangements of Birds of Paradise flowers and abstract botanicals. — Julia Smith